In an article titled “Welcome to the Unicorn Club: Learning from Billion-Dollar Startups,” venture capitalist Aileen Lee looked at the phenomenon of privately held startups that reached the rarified $1 billion mark in valuation. These giants are so scarce, she argued, that finding one is as likely as stumbling on a mythical unicorn.

The list of companies that have reached “unicorn” status includes household names like Uber, Spotify and Twitter (all which have since gone public). There are currently just 420 unicorns worldwide, 178 of them based in the US.

We recently set out to explore the relationship between valuation and brand awareness among US-based, business-to-consumer unicorns. As people who build brands through advertising, we were interested to learn how a company’s valuation — its standing in the market — tracked with its awareness and acceptance in the marketplace.

Below is a list of the 25 best-known unicorns that are both US-based and business-to-consumer. We measure “consumer awareness” as a percentage of the total consumers surveyed who said they are familiar with the primary product or service offered by a given brand. 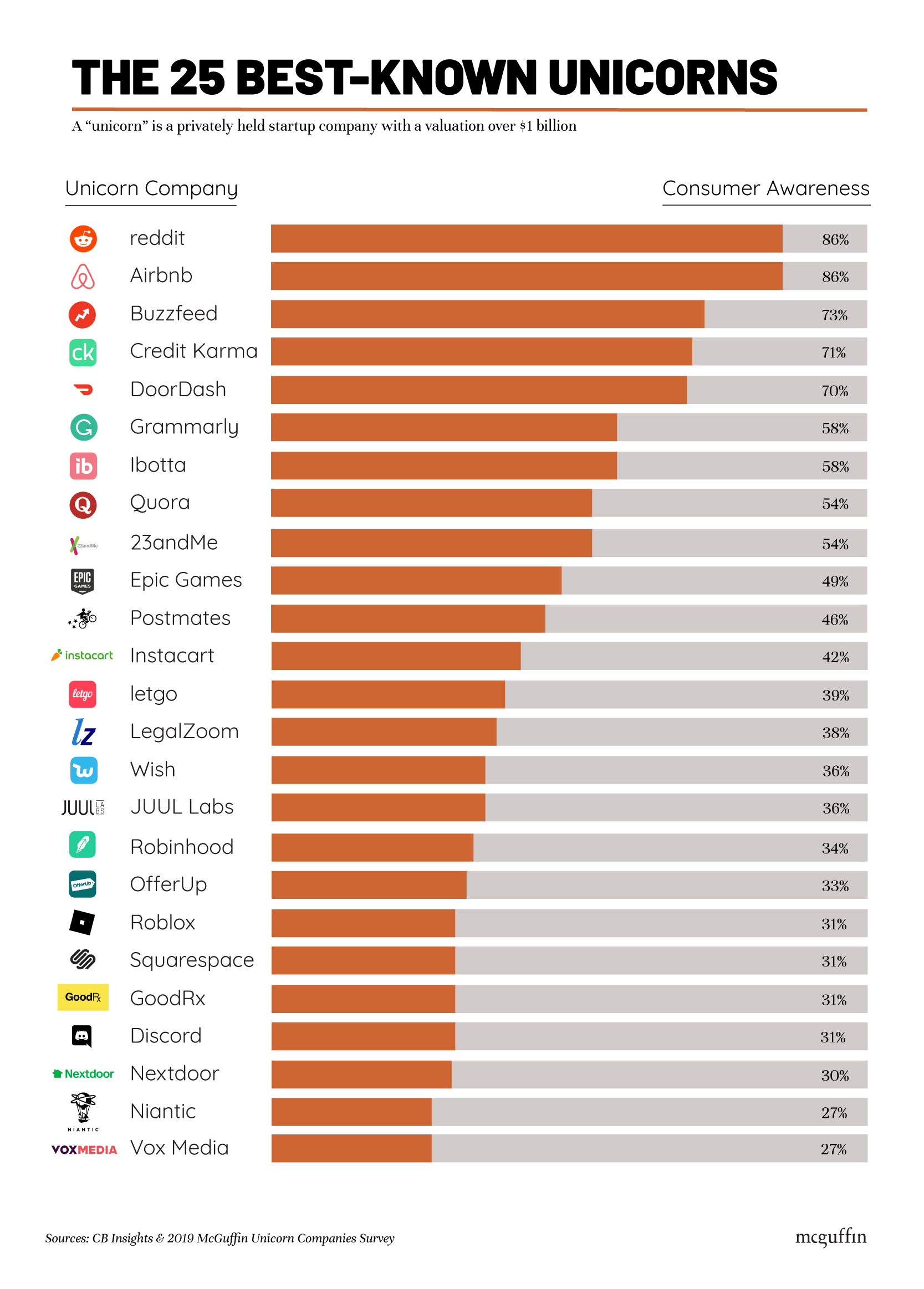 One of the dynamics we were most curious about was the relationship between valuation and consumer awareness of each brand. While the bulk of the data tells us that higher valuation leads to higher awareness, there are some exceptions. In the chart below, we identify 10 outliers where valuation and awareness don’t relate along the established trend line. In the most extreme case, the highest valued company on our list (JUUL Labs, makers of JUUL e-cigarettes, $50 billion valuation) is known by just 36 percent of consumers. 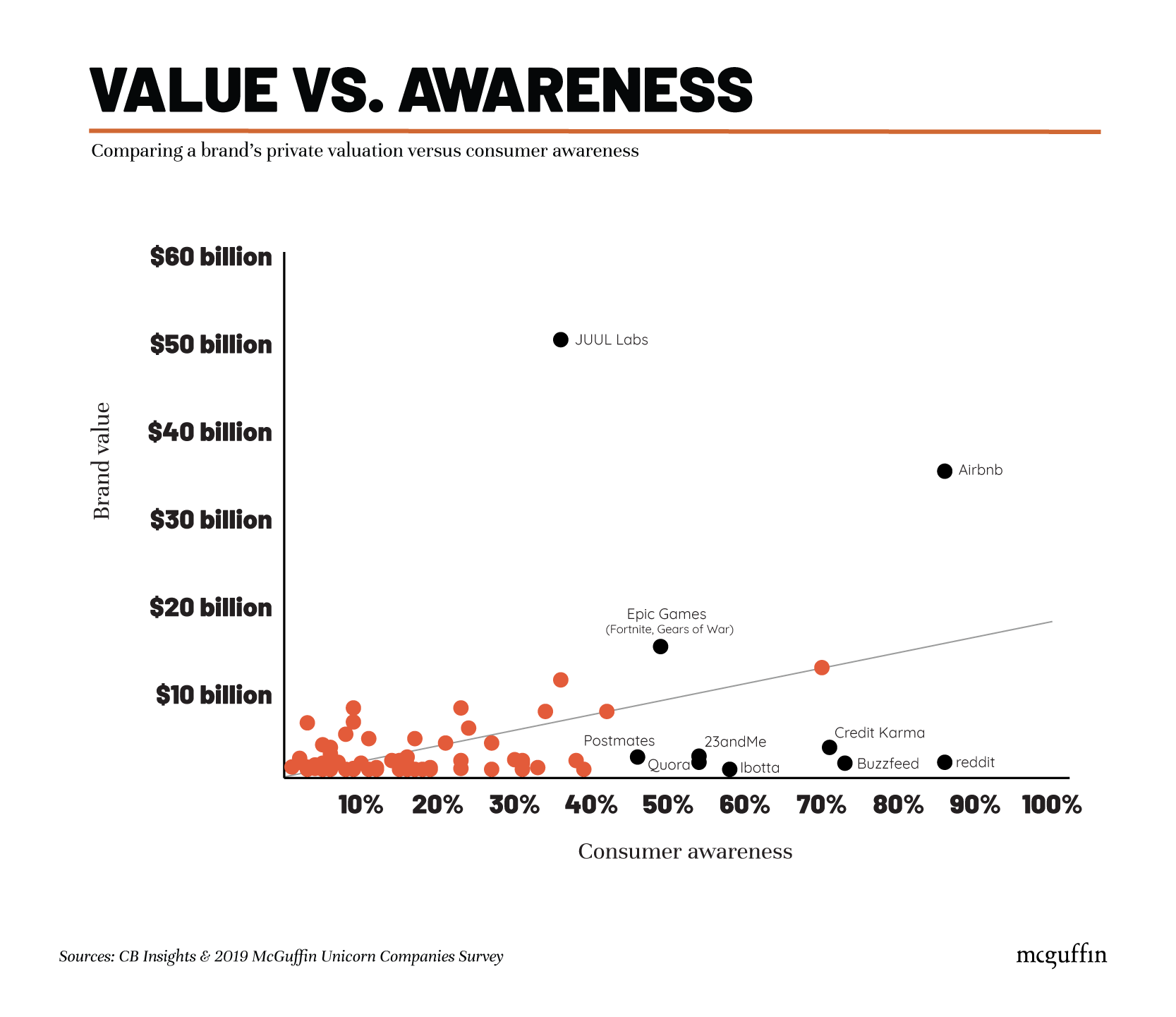 Another interesting metric to consider is the velocity with which many of these brands have gained value once they’ve earned a spot on the unicorn list. For example, JUUL Labs has grown $68 million per day since becoming a unicorn in December 2017, and Epic Games has grown $34 million per day since October 2018. On the flip side, brands like SoundHound, Rent the Runway, Grammarly and Coursera have all held at the $1 billion mark. Of all the brands that remain at the threshold of $1 billion, TechStyle Fashion Group has been a unicorn the longest, since August 2014. 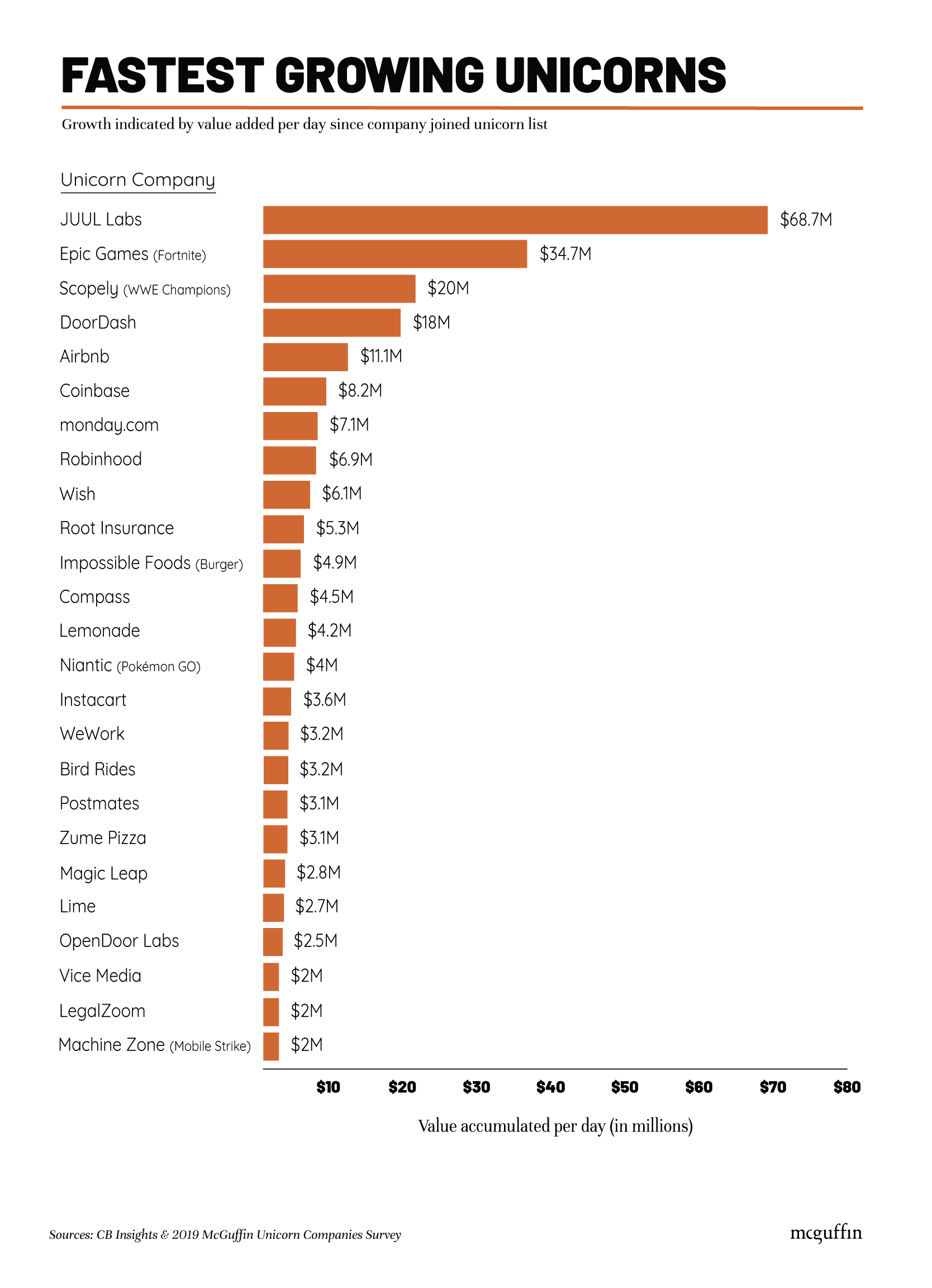 Awareness by age and gender.

As part of our analysis, we also assessed consumer awareness of brands among different gender and age segments. Largely, awareness was consistent across demographics, with few notable exceptions. 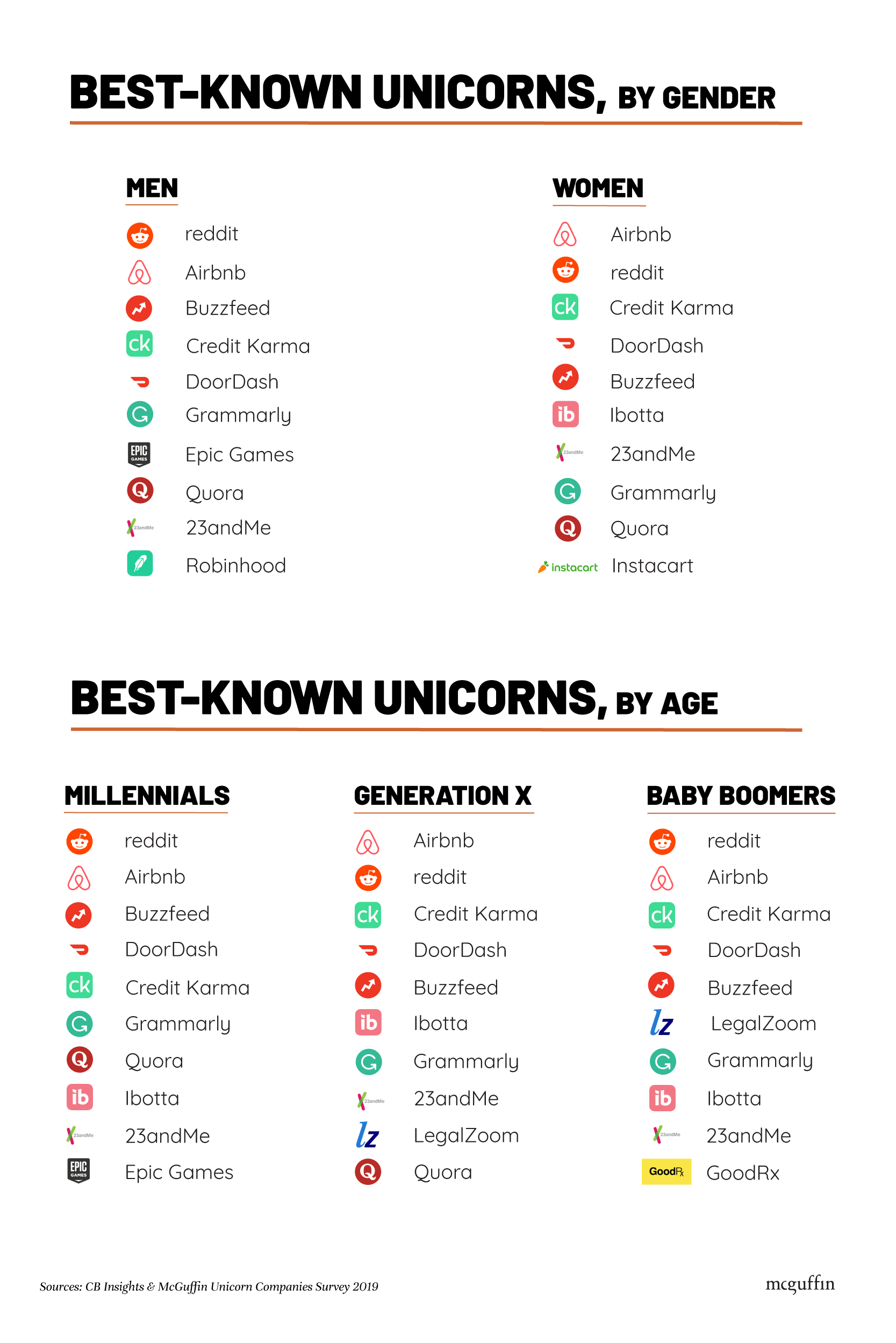 It’s probably no surprise that consumer awareness largely correlated with brand valuation. After all, we looked at business-to-consumer brands, which tend to live or die based on their ability to be visible to and understood by millions of people. That’s why smart, strategic marketing helps along the way, as unicorns become publicly traded entities.

We were a bit surprised that awareness of brands varied so little across age and gender categories, but considering the mass appeal of the largest brands we analyzed—and the categories they occupy (travel, credit services, food delivery, media)—the transcendence of demographics makes sense.

A takeaway? Unicorns aren’t exactly unicorns. They might be rare but they’re anything but invisible. Their consumer awareness and acceptance are key drivers of valuation and growth. And that’s no myth.

Methodology:
To establish our list of unicorn companies, we used the latest data from CB Insights’ Complete List of Unicorn Companies. Using a pared-down list of only US-based, business-to-consumer companies, we surveyed 4,014 consumers between June 14 and November 9, 2019, to determine which companies consumers are most familiar with. Survey respondents’ ages ranged from 18 to 70, with an average age of 35. Fifty-five percent were female, and 45 percent male.

Fair use:
Feel free to use this data and research with proper attribution linking to this study. When you do, please give credit and link to mcguffincg.com.