Bold Can Be Beautiful — A Message to CMOs

For marketers, is a pandemic the time for business as usual?

The latest edition of The CMO Survey, sponsored by Deloitte LLP, Duke University’s Fuqua School of Business, and the American Marketing Association, offers a timely and illuminating look at the state of marketing in the time of COVID-19.

Some of the findings were unsurprising. Digital activities are up. Profits, customer acquisition and marketing staff are down. There’s a greater focus on preparing for the future.

What is eye-opening is that many CMOs seem to be playing it safe at a time when consumers are fundamentally reassessing what they spend, how they spend and where they spend. According to the study, 25% of marketing leaders predict weaker loyalty levels among customers. Respondents also predict that customers will place a higher value on trusting relationships, with 29% saying it will be customers’ top priority.

And yet, at the same time, many marketers report falling back on internal information sources to guide their strategy during the pandemic. Why the same-old, same-old? 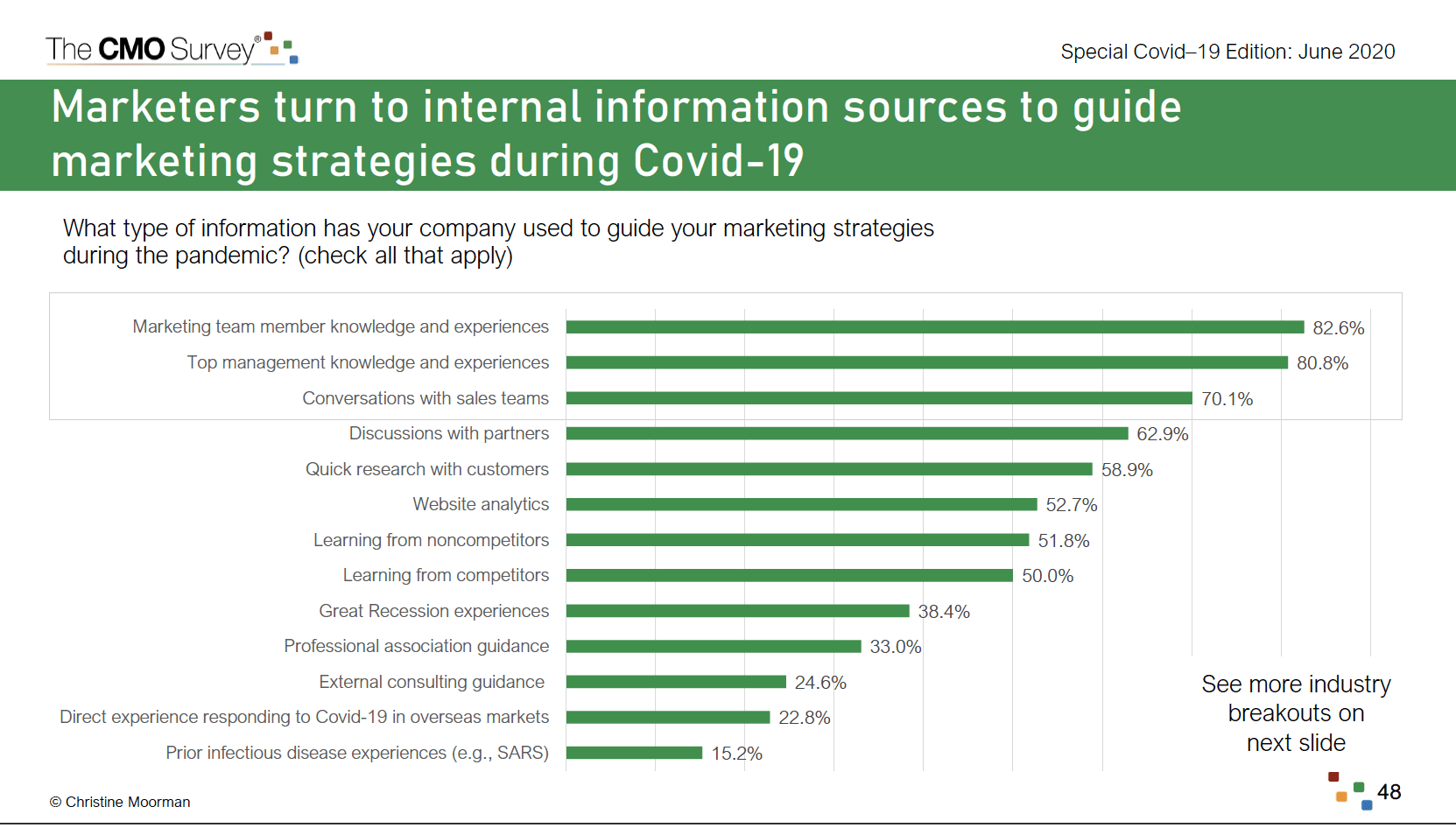 An article from Campaign reports CMO tenure hovering at 18 months, suggesting a need to make shorter-term impact and making due with what you have. At the same time, The CMO Study points to the fact that marketing importance has grown during the pandemic.

A marketing professional could take away the lesson that staying in the center lane during this era of disruption represents less risk for the CMO — yet more for the company. Your brand could strike a sour note, or miss an opportunity to stand apart. Right now, all signs are that fortune favors the bold. 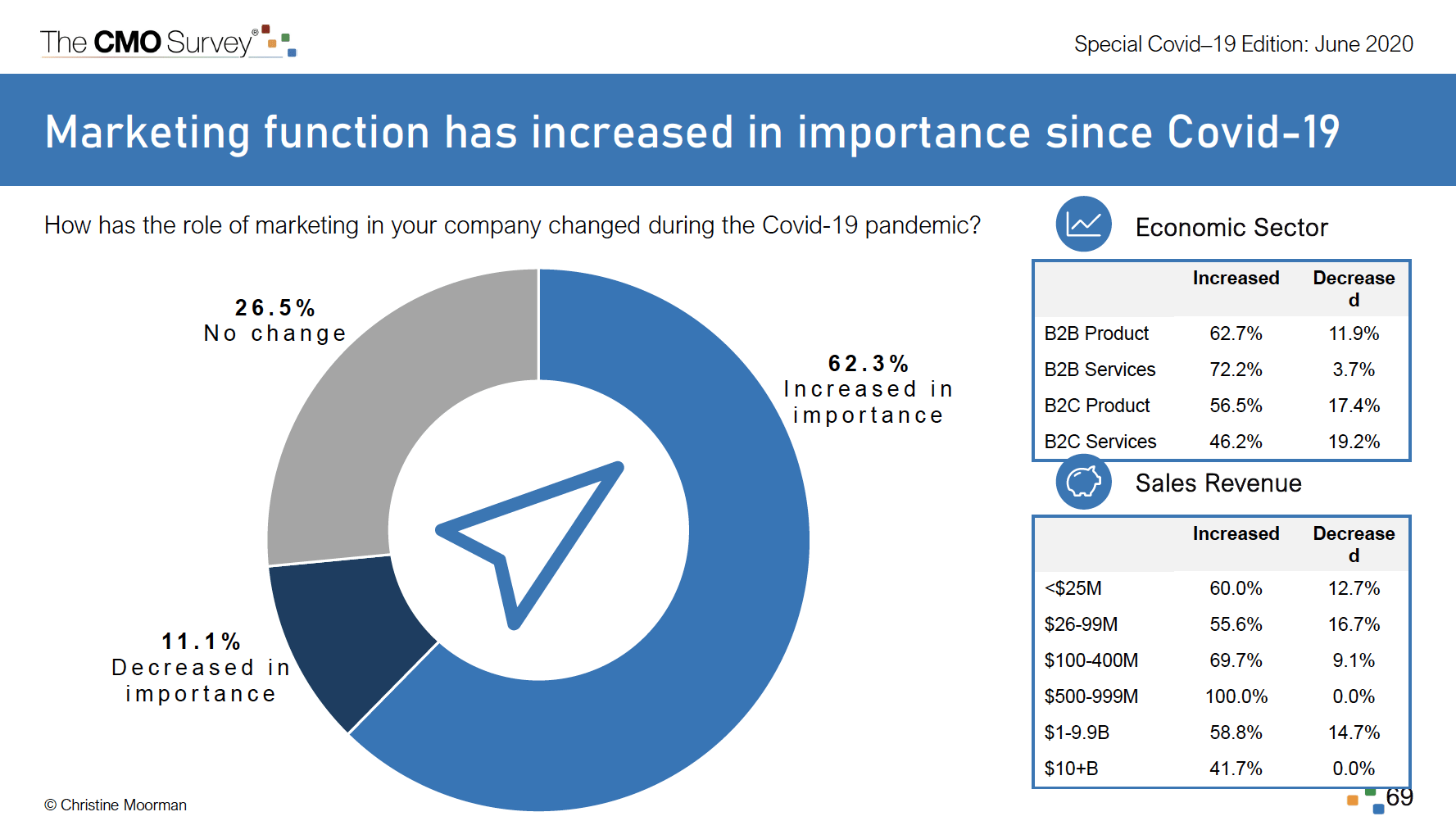 Could being brave yield benefits?

The CMO Survey points to the fact that, because COVID-19 has forced consumers into the same digital space, they are paying attention to the behaviors of companies they support and are voting with their dollars. Yet, as the study states, “while the pandemic has influenced the importance of the marketing function itself, it has not influenced the willingness of brands to take a political stance, with 81% of marketers reporting they feel it is inappropriate for their brand to take a stance on politically charged issues.”

At the same time, a large percentage of CMO Survey respondents say they’ve seen a greater acknowledgement of “companies’ attempts to ‘do good’.” 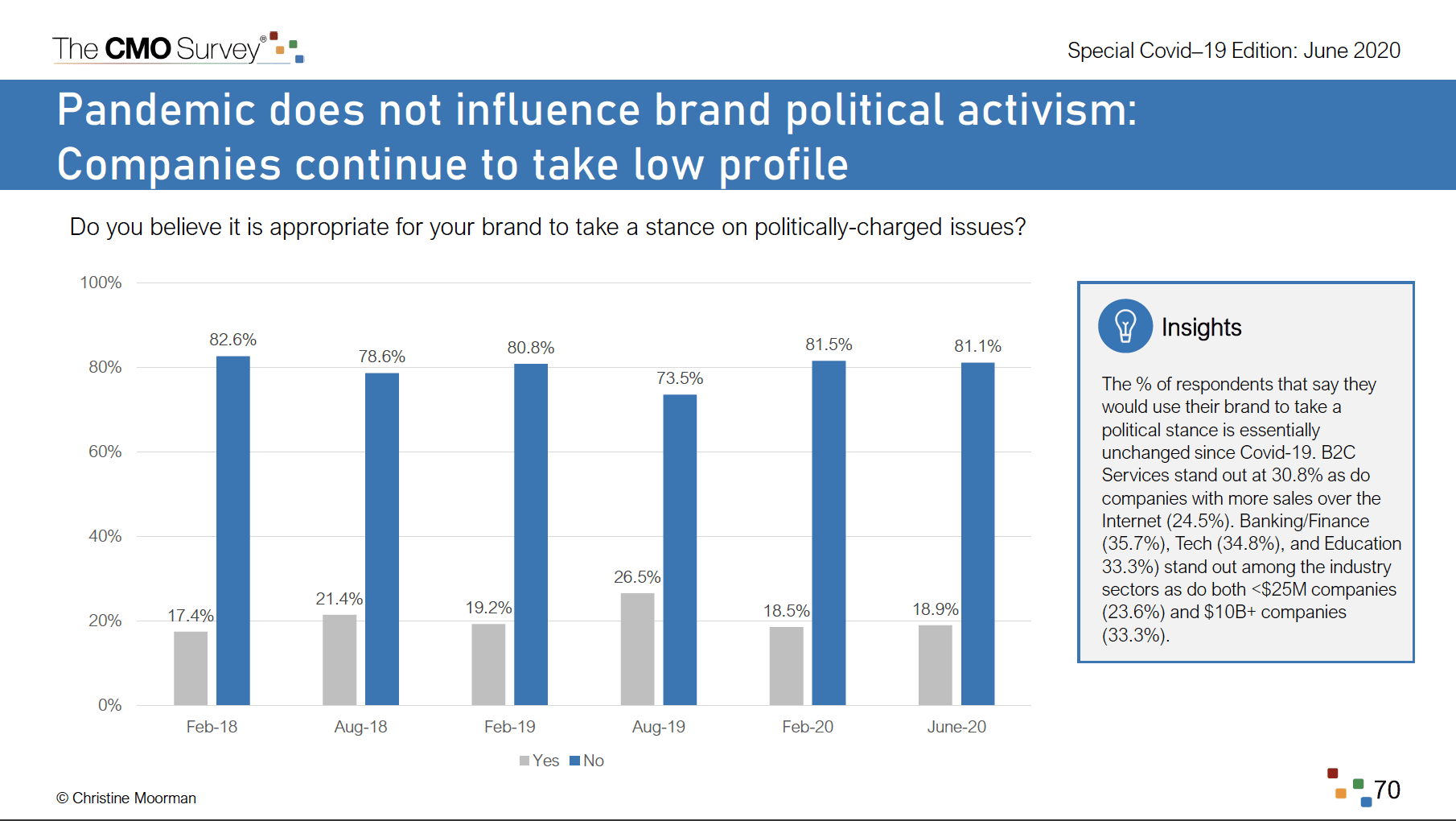 Taking a stand to stand out.

The marketing consultancy Good. Must. Grow. recently released the results of their Conscious Consumer Spending Index, compiled every year since 2013. The benchmarking study surveys more than 1,000 consumers to gauge the appetite for conscious consumerism and charitable giving.

According to another study — 5WPR’s 2020 Consumer Culture Report — 83% of millennials feel strongly that the brands they buy from should align with their values, and 76% want to see CEOs actively using their platform to address important social issues.

CMOs who’ve pushed their companies to make their marketing speak to their values have seen success. San Francisco-based Bank of the West leveraged the bank’s environmentally conscious lending practices and its culture of diversity to position itself as “The bank for a changing world,” helping it stand out against larger competitors with bigger marketing budgets. Patagonia has championed sustainability and environmental issues for years, even going so far as to sue the U.S. government and President Trump in 2017 regarding proclamations to reduce the Grand Staircase-Escalante and Bears Ears National Monuments. Nike recently took on racial injustice with an ad that concluded, “For once, don’t do it.” Burger King ran a spot praising people for staying home and away from its restaurants during the pandemic, recognizing their quarantined customers as “couchpotatriots.”

Other companies have stumbled. Some went to market with messaging that appeared tone-deaf, superficial or self-serving. One clothing company touted quarantine as “the perfect opportunity to get dressed up.” A report from communications firm Edelman states that 71% of respondents reported that if during this time “they perceive that a brand is putting profit over people, they will lose trust in that brand forever” and 77% said “they want brands only to speak about products in ways that show they are aware of the crisis and the impact on people’s lives.”

The rules have shifted. Consumers’ desires, habits and outlooks have changed, perhaps permanently. CMOs who stick to a familiar playbook may find that the game has changed and they’re on a losing team. If there’s a time for marketers to be bold, to break through, to stand out, now is surely it.

The Shifting Role of the Bank CMO

Who’s Nipping at Your Heels?