It’s no longer just about the bottom line. It’s about a better world.

In a recent presentation at the annual ANA Masters of Marketing Conference, Manos Spanos, senior VP of brand marketing for yogurt at Danone North America, summed up the importance of “purpose.”

“Purpose is no longer a fad, purpose is a norm,” he said. He followed that declaration by turning the industry’s “four Ps” — which used to mean product, price, place and promotion — on their head.  The new “four Ps,” Spanos argued, now encompass people, purpose, passion and positivity.

The zeitgeist, and the numbers, suggest Spanos is right. The purely transactional focus of yesteryear ignores the fact that consumers’ relationships with companies are increasingly emotional. We want to do business with brands that share — and embody — our values.

That makes purpose, especially, non-negotiable for most companies. Businesses in every industry are being evaluated not just by their balance sheets or customer service but by their corporate citizenship — the real, measurable commitments they demonstrate to making things better for people and the planet.

Spanos’s comments came during a relaunch of sorts for Two Good, originally started as a low sugar offering, which has now committed to fighting food waste with their Two Good, Good Save program. Among other efforts, the initiative donated $100,000 from profits made at select partner retailers to the City Harvest and We Don’t Waste organizations for Earth Week in April 2020.

Encouraging banks to be part of the solution.

Given their role as financers of global commercial activity, banks have come under scrutiny for their purpose-based commitments (or lack thereof). And some banks are taking notice.

McGuffin client Bank of the West, along with their corporate parent, BNP Paribas, have taken substantial and ongoing steps to craft lending policies with an eye toward the realities of climate change and sustainable business practices. Their efforts have not gone unnoticed.

Recently, the Conservation Alliance issued an announcement that they intended to divest from Bank of America and move to Bank of the West. In their statement, the group said, “Increasingly, both consumers and business leaders understand that banks are part of a global supply chain that has an impact on our world. Do you know what kinds of businesses your current bank is funding?” 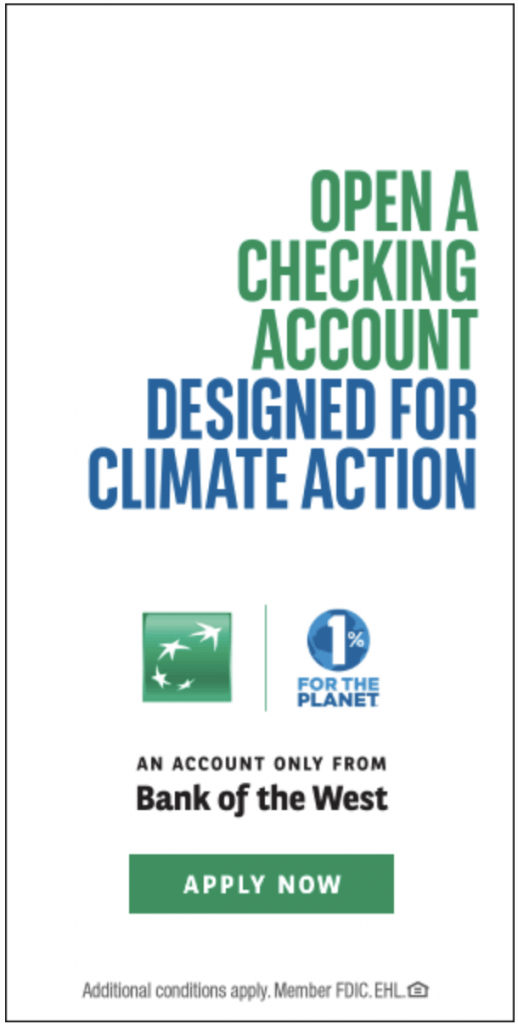 The group praised Bank of the West and added, “We will regularly assess the financial institutions we work with to ensure our investments support our vision of a planet where wild places, wildlife, and people thrive together.”

That notion is getting broader, outside support, as well. BankFWD, an organization founded by fifth-generation descendants of the Rockefeller oil and gas empire, was conceived as what the group describes as a “network of individuals, businesses and foundations that will use their banking choices and public standing to persuade major banks to phase out their financing of fossil fuels and lead on climate matters.”

Harnessing the power of purpose.

Marketing and sales leaders can be agents for progress — champions for organizational change internally, just as they are brand champions and customer advocates. As examples show, the roles go hand-in-hand.

In a white paper, McKinsey & Company offered this assessment: “In a time when people are frightened, unsure, and facing dire economic conditions, brands have an outsized role to play in their communities. This includes corporate social-responsibility initiatives designed to meaningfully support your customers and the community. While any assistance is important, we believe that those contributions that are authentic, brand appropriate, and truly helpful are more likely to not only be appreciated but also to have a positive and lasting impact on customers.”

The takeaway is this: The idea of purpose isn’t skin deep — it goes beyond, and deeper than, traditional charitable giving. It’s a sincere and painstaking effort to leverage a company’s good name to do good works that make a real difference, demonstrate a real commitment and reflect a company’s real values. Marketers, especially, should recognize that it’s an idea whose time has come, and is likely here to stay.