A vote for wise design

Let’s show some appreciation for the things we love most about Florida: its beaches, its balmy winters, its majestic, indomitable southernmost swamp. And Carl Hiaasen.

But let’s be real about the state’s recent electoral history. Three marquee races required recounts in Florida: for governor, U.S. Senator and Agriculture Commissioner. All of it brings back memories of the tumultuous 2000 election, hanging chads and Bush v. Gore.

Some of this is a product of changing state demographics and a fiercely divided electorate. In one highly publicized case, though, the finger points toward a poor graphic design.

The mystery of an undervote.

The Florida Senate race between incumbent Bill Nelson, a Democrat, and the state’s Republican governor, Rick Scott, was neck-and-neck going into Election Day and stayed that way until late in the evening, when Nelson conceded, seemingly trailing Scott by 57,000 votes. In the days that followed, however, as additional votes were tallied, that deficit shrank to just over 15,000 votes.

Then this happened: In Broward County, officials noticed that 3.7 percent of voters left the Senate race on their ballot blank. That “undervoting” occurred in Broward at three times the rate it did anywhere else in the state. A preliminary tally is 26,060 people who cast votes for governor, but not the U.S. Senate, according to FiveThirtyEight.

A persuasive — and likely — theory for this undervote was that a county-approved ballot tucked the Senator race box under a long list of instructions about how to vote. At the top of the next column, where impatient voters’ eyes would likely land first, was the box for governor.

In an election that could be decided by just a few thousand votes, this kind of information design glitch isn’t just an inconvenience. It creates recounts, court challenges and even distrust in our voting system.

And it goes without saying that bad information design isn’t just the scourge of election boards and secretaries of state. It can hold back companies, too, resulting in lost business, unhappy customers and a tarnished brand image. 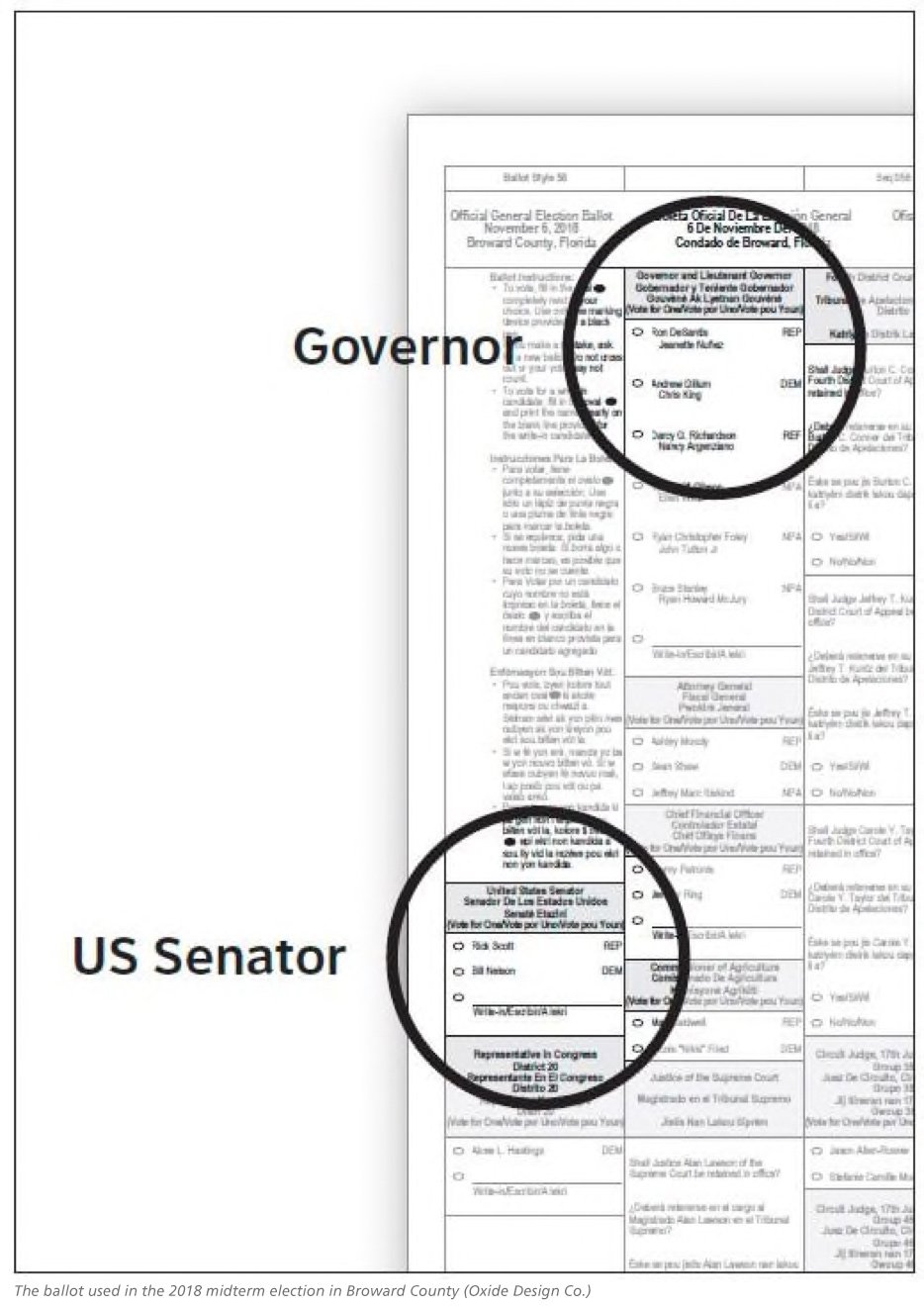 The Broward County ballot that’s become news following these midterms is the most publicized electoral design mishap in recent years, but it’s far from the only one. In 2008 and 2010, an estimated half a million people didn’t have their votes counted due to mistakes completing a ballot. Poor and confusing ballot design also adds to long lines on Election Day.

The problem hasn’t gone unnoticed by design professionals. The group Center for Civic Design works with public officials to, in their words, ensure voter intent through design. Dana Chisnell, co-founder of the organization, left a private sector career in user experience design to focus on helping improve the user experience at the ballot box.

According to Chisnell, Broward’s 3.7 percent undervote is a red flag. “We typically see 1 percent, so to see an undervote that high is pretty remarkable. Best practices say to leave a blank space under the instructions. But there’s pressure to fill every space on the ballot to minimize costs. In this case, best practices weren’t followed and that appears to have caused a real problem.”

Chisnell points out that ballots aren’t designed by professional designers, and that they’re governed by strict financial, technical and legal constraints, which don’t always factor in human behavior. She says there’s a lesson here not just for election leaders but for any companies facing legal and compliance requirements, like those in the financial and healthcare sectors.

“Design is nothing without constraints,” Chisnell says. “When everyone is making decisions, lawyers are making decisions, and you’re just adhering to rules, you can end up with something that’s not understandable to a normal human. That’s bad design.”

Bringing best practices to every communication.

For corporate and nonprofit marketers, bad information design impacts not just forms and disclosures. Poorly considered navigation on a website can confuse or turn away visitors. An infographic can wind up looking like a corn maze. A cluttered direct mailer becomes recycling fodder the minute it’s lifted from the mailbox.

At McGuffin Creative Group, we’ve seen the damage sloppy or ill-considered communications can do. So our goal isn’t merely work that’s easy on the eye — pretty for pretty’s sake. We strive to make communications that speak with purpose, energy and clarity; work that’s both simple and human. 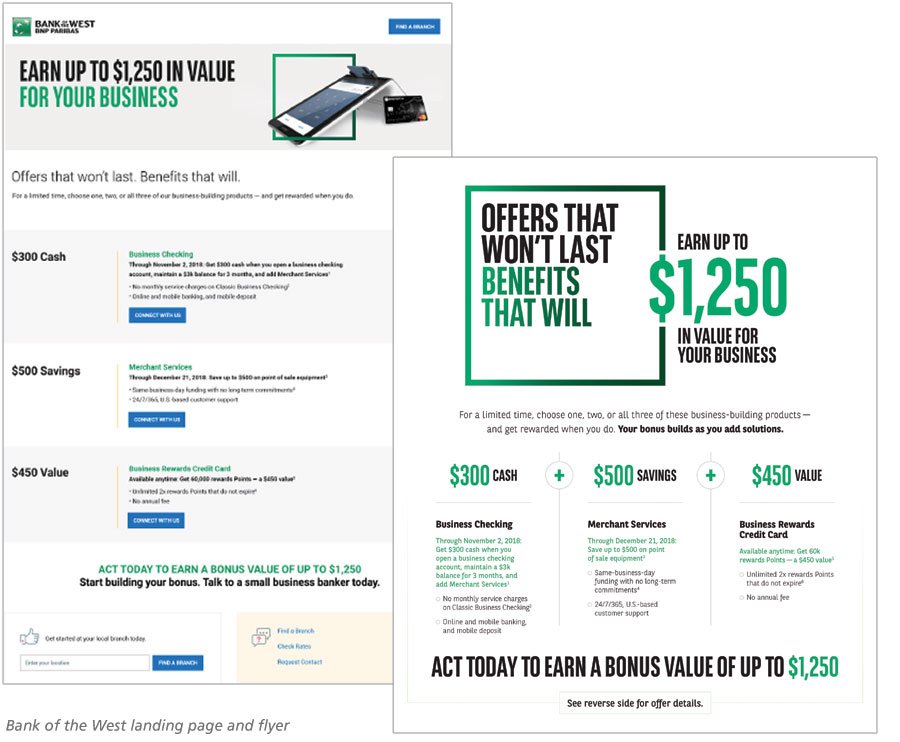 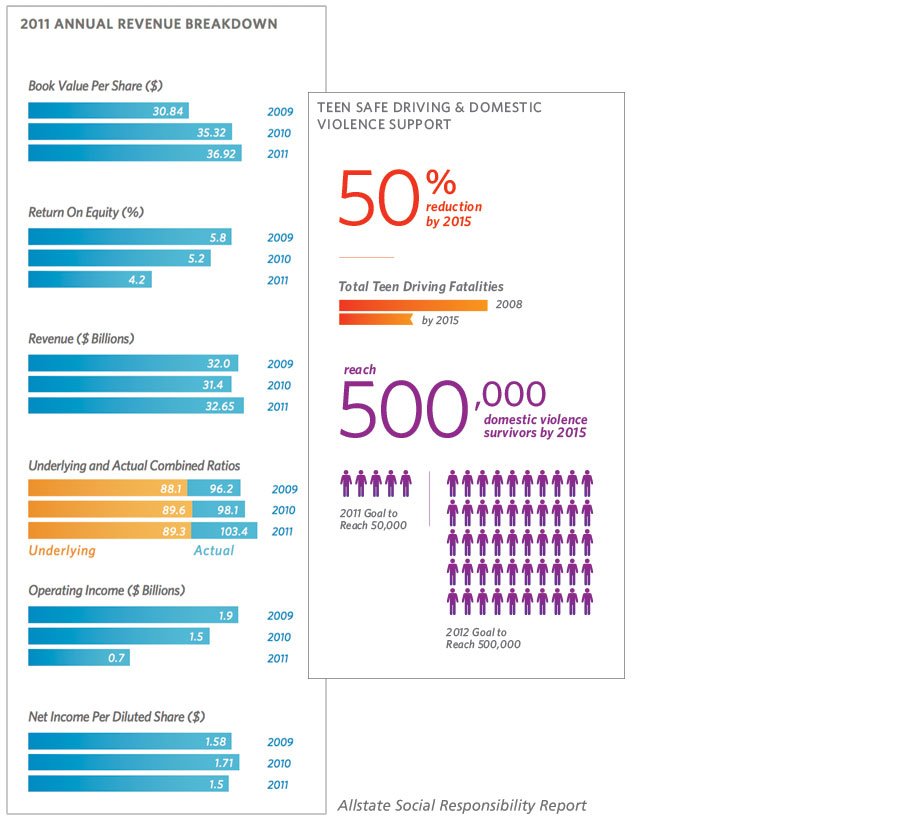 From charts to banner ads, websites to order forms, video to advertising, we work toward results that are aesthetically pleasing while speaking directly, understandably and persuasively to the user.

We follow the principles of user-centered design, which begins with an understanding of the users and their context as a starting point for all design and development. It looks something like this, which is from the Interaction Design Institute:

That’s important, because customers and prospects vote, too — with their dollars, their loyalty and their view of your brand. In a competitive space, no company can afford to leave those votes on the table.

If you’re a marketer concerned that your message is getting missed, give us a shout. From financial services to healthcare to tech, our clients count on us to bring clarity to even the most complex communications.